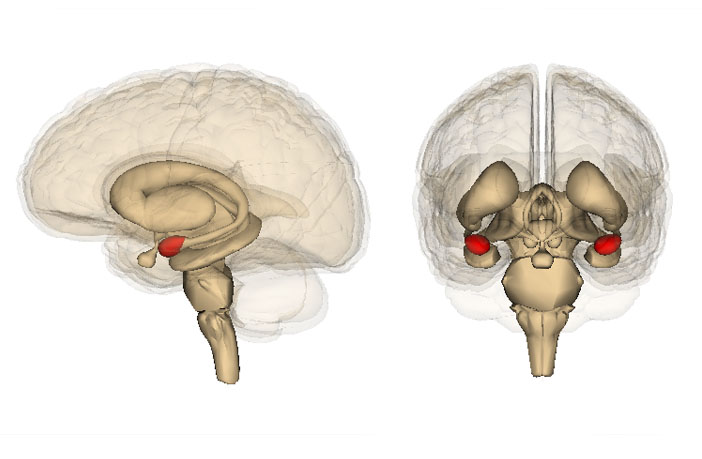 Meditation and yoga practice is associated with smaller right amygdala volume, a brain region involved in emotional processing, according to research published in Brain Imaging and Behavior.

For their study, the researchers analyzed data that had been collected during the Rotterdam Study, an ongoing population-based study that has been conducted in The Netherlands since 1990. The study has recruited more than 15,000 subjects aged 45 years or over.

The researchers were particularly interested in a subgroup of 3,742 participants who had responded to a meditation and yoga practice questionnaire and had undergone an MRI of the brain. Many of the participants underwent multiple brain scans, allowing the researchers to examine structural change over time.

Participants who reported practicing meditation and yoga also tended to have smaller right amygdala and left hippocampal volume compared to those not practicing — and right amygdala volume tended to decrease over time among practitioners. Research suggests the right amygdala controls fear and aversion to unpleasant stimuli.

The findings could indicate that “that meditation and yoga practitioners have become more aware of their stress, but are at the same time more able to deal with it hence the smaller amygdala volume,” the researchers explained.

The results are in line with previous research that found meditation training could produce a generalized reduction in right amygdala activity in response to emotional stimuli, as measured by brain scans.

But the new study — like all research — includes some limitations.

“Although performed in a very large population-based sample, this is still a selection of participants that are generally healthy and motivated to join research,” the researchers noted. “Furthermore, this study contains mainly elderly individuals, who may not be as actively involved in meditation and yoga practices as younger people might, and who also might show a different structural response than younger participants due to decreased brain plasticity.”

Coping in a Covid-time

How I Stopped Chasing Happiness and Started Enjoying My Imperfect Life. By Mai Pham